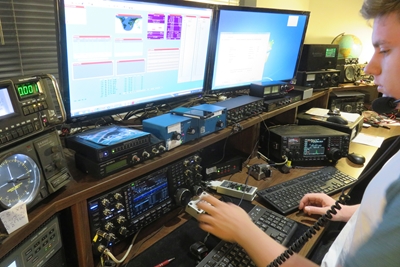 Chris Danby G0DWV recently sent us a brief report on how his station, which is comprised of Icom radios, was used in a forty-eight-hour Amateur radio contest called CQ World Wide (CQWW). It is great how he encourages the next generation into the fantastic hobby of Amateur radio. In this case it was Jamie Williams, M0SDV amounting a fabulous performance and score. Chris begins: ‘Operating as G9Y from my station G0DWV, 19-year-old Jamie, M0SDV, did a Single Operator all band (SOAB) High Power (HP) un-assisted (single operation, all band, high power, unassisted- i.e. no dx cluster) entry in the biggest contest of the year, CQWW CW . Jamie has been making a name for himself with some DX-peditions and operating at some other big stations in teams at M6T MM, G5W M1 / M2. This was his first SOAB HP in CQWW CW. In a little over 40 hours in the seat he put in a great score making almost 4000 QSO contacts and just over 3.1 million points. The station is comprised of a two radio Icom setup — an IC-7851 as the main radio and a much-used, well-loved IC-756Pro III. With suitable filtering and two amplifiers it was possible to operate both radios at the same time with little to no interstation interference. During the contest Jamie was running two bands a lot of the time in SO2R configuration (single operation, using two radios) either CQing on one and search pounce on the other or duel CQing, something that is a sight to see…. It's only for the good CW op though, with CW speeds around the 32 – 35 wpm, you need two brains! Antenna separation, good grounding and station engineering practices were used in preparations for the contest resulting in a great result overall. The radios both performed flawlessly, bagging a lot of good DX into the log. 73
Chris, G0DWV’ Thanks for sending this report through and carry on with your great work of encouraging youngsters into the hobby. Icom UK Marketing - marketing@icomuk.co.uk
27/11/2019