Choosing the Right Antenna for your Icom VHF Marine Radio

Even the best marine radios in the world will not perform to their optimum if connected to the wrong antenna. Much like the tyres of a sports car are the only contact point with the ground, providing the necessary grip & traction when racing around a track, a radio's only contact point with the outside world is it's antenna. If the race car tyres are low-quality or worn then the car will not perform to it's best capability - similarly, a radio needs a well-matched load (antenna) to allow the efficient conversion of electrical energy into radio waves. The antenna also needs to be well designed such that the radiated waves travel in a required direction - there is no point directing radio waves up into space when all of your contacts are on or around sea-level ! A poor quality antenna will not provide the required good match & may provide you with questions about your installation and whether your radio equipment is working correctly. That is why we suggest you use a good quality antenna from a reliable manufacturer. Here are just some of the considerations you should make before your purchase of an antenna: Range
The higher your antenna is above the water, the greater the distance you'll achieve. VHF radio waves travel pretty much in straight lines & your communications range will often be referred to as ‘line-of-sight’. In a sense your antenna has to be able to "see" the other antenna or put another way, there must be a clear unobstructed path between antennas. Because of the curvature of the earth, as the distance between 2 antennas increases, they eventually fall below the horizon and can no longer communicate with each other. In most cases, communicating by way of VHF is limited to about 35-50 miles depending upon antenna hieght. Sailboats have a distinct advantage here as you can mount an antenna at the top of the mast and reach great distances.

When it comes to antennas, size matters - the longer the antenna, the higher the gain. Antenna gain refers to the effective increase in signal strength, achieved by the manipulation of the transmitted (or received) signal pattern. Much like a TV antenna on the roof of your house is concentrated in a particular direction, it is said to have high gain - but in that direction only. Swing the antenna away from the signal source & your TV loses picture quality. For marine purposes, you can't use a TV-type directional antenna as you wish to communicate the full 360 degrees, or omni-directionally, so instead of concentrating the signal in a particular direction, a marine antenna with gain will compress or "squash" the horizontal signal. Generally speaking, the higher the antenna gain, the flatter to the horizon the signal will get - but hold on, isn't that what you want, as aiming a signal at the horizon will give you good range ? Remember however that your boat will be pitching & rolling on the waves, so your very flat compressed signal will then also be pitching & rolling, particularly if your antenna is mounted at the masthead where the motion of your vessel will be most pronounced. This is not conducive to achieving good quality, reliable communications as every time the vessel rocks, you will lose signal. It is thus vital that antenna gain is carefully selected & typically we would not suggest more than 0dBd for masthead or 3dBd elsewhere. This introduces another problem as many low-quality antennas are not totally truthful about their gain claims or do not quantify gain figures with performance graphs. You also have to be very careful when comparing gain as there are a few different figures used from different suppliers - "dB", "dBi", "dBd" & "dB marine" are all used but only dBi & dBd can be quantified as both refer to performance relative to a control antenna, albeit a theoretical antenna (in space) for the dBi figures. To compare dBi & dBd you can use the following formula : dBi gain = dBd gain + 2.1 - thus a 0dBd antenna is 0 + 2.1 = 2.1dBi gain. Because antennas work due to the principles of physics & radio wavelengths, you will generally find marine antennas in 4 common lengths : i) shortened antennas : up to 50cms = -3dBd
ii) 1/2-wave (dipole) antennas : approx. 1metre = 0dBd
iii) colinear gain : approx 2.5metres = 3dBd
iv) colinear high-gain : approx. 5metres+ = 5-6dBd You can thus compare like-for-like gain antennas by checking the antenna length on the brochure - if antenna A quotes 3dB but is 1metre long & antenna B quotes 0dBd but is also 1metre long, then you know that both have similar 0dBd gain. I would be more tempted to go with antenna B as they are not trying to artificially inflate performance figures for sales purposes. 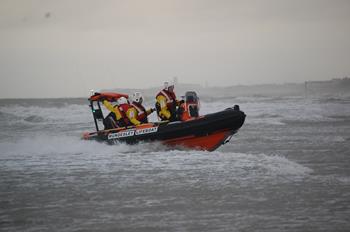 Mounting
How you attach your antenna to your boat depends on the features of your boat. The three most common mounting methods are: • Rail Mounting: Available in a variety of sizes and include ratchets to allow easy lowering.
• Mast Mounting: For sailboats
• Surface Mounting: You can use a flange mount if you have a truly vertical or horizontal surface to mount to. In most cases you will use a ratchet mount that can adjust for the slope of the mounting surface. You can easily lower the antenna with this mount also. Mounting Location
You should follow these general guidelines for mounting: • Mount as high as possible to take advantage of line-of-sight.
• Mount away from large metal objects
• Mount away from other antennas
• Mount at least 3 feet away from your marine radio Other considerations
• Use quality coaxial cable and connectors:
You can lose considerable signal strength with poor cable and connections. The longer the cable, the more signal loss there will be. Cable lengths of 10 to 20 feet are not of much concern, but a sailboat using small diameter cable running 100 foot long can lose 80% of its signal strength. As the cable length to your antenna increases so then should the diameter of the cable being used - RG58 is OK for short lengths & RG213/UR67 would be better-suited for longer runs. • Combination antennas:
Whenever possible, you will get the best results using an individual antenna for each purpose. You can get a VHF antenna that is also your AM/FM antenna, but it won't work quite as well as the single purpose antenna. Icom UK recommends Amphenol Procom marine antennas due to their world-renowned quality, reliability & performance.