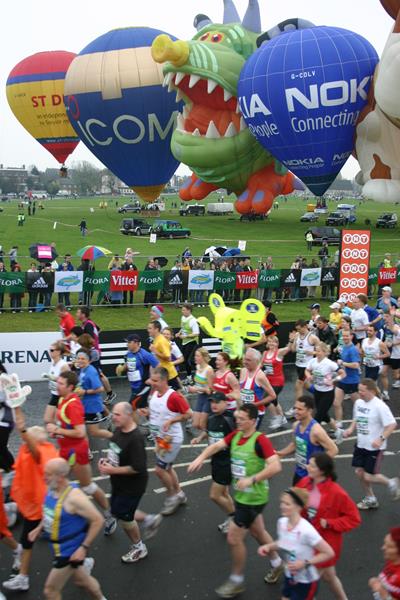 Icom (UK) Ltd is realising a great deal of success in the Commercial radio sector with strong growth and increase in market share. The company has seen many high profile organizations & events making Icom their choice for radio communications. Icom dealer Showlite (a supplier of radio communication equipment services to the Events Industry) has placed Icom products at some of the most prestigious outside events in the calendar including Royal Ascot, the Flora London Marathon and the Farnborough Air Show. In the four years since its inception, Showlite have built a high profile client base which reads like the who’s who of events in the UK. Showlite’s first major client was Ascot Racecourse who continue to be a regular monthly customer hiring 200 radios for each event. Last year the company purchased 600 Icom F12/F22 which is soon to increase to over 1,000 radios. These have been used at the following events: • The Flora London Marathon
• Farnborough Airshow
• Labour Party Conferences
• Surrey County Cricket Club (Oval)
• Ascot Racecourse
• Homelands Festival
• Royal Ascot
• Glastonbury
• Tall Ships Race
• Golden Jubilee (various) Showlite's co-director Paul Read said, ‘We concentrate on having a positive relationship with our clients by paying attention to every single detail and making sure that they get exactly what they want, when they want it. There is never a second chance in the event industry. If a major event is going on and you cannot guarantee delivery or performance then you just won’t get the business again.’ Paul went on to say, ’We predominantly use the IC-F22 UHF handportable radios, although we do have a small number of IC-F12’s for VHF comms. We have also purchased a quantity of IC-F410 mobile units, which we use in the operations room as base stations. In fact we used one of these units in each of the five organisers' offices (together with 300 handportables) around the site at the Homelands Pop Festival at the Winchester Bowl.’ Mike Baker, Showlite's other director said, ‘We looked at several radio products three years ago. What we wanted was a radio that was simple to use and easy to program. We looked at half a dozen different radios and Icom came up tops, meeting all those requirements as well as being very cost effective. We first trialed Icom radios at the Labour Party Conference in 2001 and they worked really well. Everybody liked them and they were used again at their last two conferences.’ Mike went on to say, ‘We introduced the IC-F12/22 series in January 2002 at Ascot. Ascot had been using other radios for about 4 or 5 years now and were looking for a change. They really liked the Icom radios. They especially liked the call clarity. When you are in crowds, you sometimes need a nice crisp transmission; well that’s what you get with the Icom.’ Showlite's typical client generally has requirements for hundreds of radios, sometimes with base stations and sometimes not. Last year the company provided 500 hire radios for the International Festival of the Sea and nearly 1,000 radios for Glastonbury of which the majority were Icom radios. Paul Read said, ’We are in a fortunate position that most of our clients are our greatest advocates. A good example can be typified by what happened last year when we were approached to provide communications for the Farnborough Airshow. We had a phone call out of the blue asking us to talk to them about radio hire. It was a great surprise! We were then invited to put a tender in for the job and we won it. I think we won it on our good reputation for providing communications for large-scale events.’ Mike Baker said, ’Different events have different requirements. Some customers require a hands on approach and the backup we provide is reassuring for the client. For instance, during Royal Ascot we provided a manned communication control room with an Icom base station and a radio distribution point where we handed out radios to staff and took them back at the end of the day. The radio distribution point is usually manned all day so that batteries or any other related accessories can be replaced.’ He went on to say, ’Radios can help an organistaion run an event efficiently at a fraction of the cost of everyone using mobile phones. When you have large crowds involved, safety becomes a very important issue. ..so let’s not forget the security aspects that radio can offer. With the problems that Glastonbury has had over previous years the total management of the site was a vital issue for security and crowd safety. I think the maximum attendance allowed for the event is 80,000 people, although in previous years I believe that was well over 100,000 people so there needed a dedicated radio infrastructure to deal with this.‘ Paul Read said, ’The Festival of the Sea is a good example of getting it right at a large-scale event. This was a big event for us last year and it went without a hitch. The logistics at the Festival of the Sea was a real challenge. We were not only dealing with the communications in the Naval Dockyard, but we also needed to provide coverage in all the event car parks. Importantly, the organisers came to us with a clear brief and we delivered it for them…and it all worked well.’ Paul went on to say, ‘Because of our experience we find that if problems do arise, we have already seen them before. At some events there are people who have never used a radio before in their life. We give them basic training on what it does and how it does it with a few do’s and don’ts thrown in. In the main though we try to be prepared for most challenges that we might encounter. We take spare batteries to every event and generators just in case there is a power failure. We are prepared for anything fate can throw at us. Proactivity, good products and experience are very important in business today.’