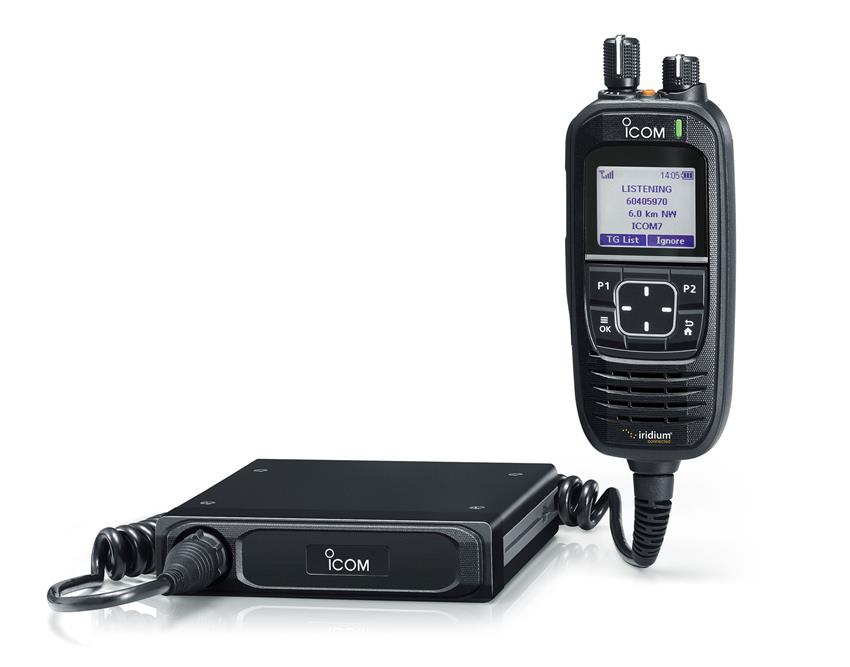 IC-SAT100M Satellite PTT Mobile radio The IC-SAT100M is the world’s first satellite PTT mobile radio that uses the Iridium satellite communication network. Designed to be used either in a building or installed in vehicles/vessels, the IC-SAT100 provides a global radio service to users with the push of a PTT (Press to Talk) button. It can be used as a communication tool in remote and isolated areas where there is no mobile phone or land based radio network infrastructure. Also, in the event radio or cellular network infrastructure may be rendered unusable by human or natural disasters, satellite communication can provide a stable and reliable backup solution. IC-SAT100M Features
Dedicated satellite push-to-talk (PTT) mobile radio
The Icom IC-SAT100M is a dedicated satellite push-to-talk (PTT) mobile radio and is the only PTT mobile radio offering real-time communications at the push of a button between a group of individuals, each of whom can be anywhere on the planet*. The IC-SAT100M uses the Iridium® satellite communication network, which covers the entire globe, including both poles. . Together with its handheld counterpart, the IC-SAT100M can be used as part of a powerful global communication system operating in remote, isolated areas where there are no mobile phones or landline network infrastructure. Even if terrestrial network infrastructure is rendered unusable by human or natural disasters, SATELLITE PTT can provide a stable back-up, independent from other networks.
* Subscription contracts are required for using the IC-SAT100M. Depending on the country or region, carrying and/or use of the IC-SAT100/M may be prohibited. One-to-Many Communication
IC-SAT100M users can immediately start talking to all the radios in the same talkgroup, with just a push of the transmit (PTT) button. . Real-Time, Low-Latency Global Communication
Using 66 Low Earth Orbit (LEO) Iridium® satellites, the IC-SAT100M provides low-latency communication, and broader, more reliable network coverage, compared to Geosynchronous Equatorial Orbit (GEO) satellites. . Interoperability with Conventional Radios using the VE-PG4
With a VE-PG4 RoIP gateway, the IC-SAT100M can interconnect with an IP phone, WLAN, LTE, digital* and analogue radios and other communication systems.
* Type-D multi-site trunking and conventional systems. Other Features
• Power supply capability over Ethernet from main unit to antenna (with RF unit)
• LAN cable (CAT5e) accepts up to 100 m cable connection (from main unit to antenna with RF unit) without any sensitivity loss and thin cable allows easy wiring work
• Supplied multi-functional speaker-microphone
• IP67 waterproofing and dust-tight protection*1
• Voice Recording function
• Built-in Bluetooth® capability
• Multiple language display (English, Chinese, French, Japanese, and Spanish)
• Integrated GPS receiver shows received signal position information on the display
• 1500 mW powerful audio output
• Short Data Message facility
• AES 256-bit encryption*2
*1 Main unit: IP54, Mic: IP55. *2 Communication data is scrambled in the Ethernet section to prevent casual eavesdropping. IC-SAT100M - Installation Examples
In-Building Use
You can install the IC-SAT100M and the antenna with just a LAN cable (Maximum 100 m, 328 ft). . Mobile Use
By attaching the antenna on the roof, you can use the radio in a vehicle. The IC-SAT100M has Bluetooth® capability and allows hands-free operation* while driving.
*A third party accessory required. * Guidance about the use of radio equipment in vehicles can be found on our website: The Use of Two Way Radio Equipment in a Vehicle IC-SAT100M - Advanced System Examples
Flexible Installation with a PoE Switch and IP Network
By using a PoE (Power over Ethernet) switch (for power supply to the antenna) and IP network, you can install the IC-SAT100M with little disruption. This solution allow a maximum extension of 400 metres. . Low Visibility Installation for Mobile Use
The optional AH-40 antenna provides flexible antenna installation. You can replace the antenna with the AH-40 and mount it on the roof instead of the RF unit. When you use a third-party antenna cover, you can cover the AH-40 making it look more covert. . Advanced System Example with VE-PG4
The VE-PG4 is a versatile RoIP (Radio over IP network) gateway unit, which seamlessly interconnects satellite PTT radios, PMR radios, LTE radios, WLAN radios, IP phone systems, and external devices. In addition to the IP Network (LAN/WAN), the built-in LTE module* provides virtually nationwide communication coverage.
*Service availability depends on the country. Network coverage provided by a custom SIM card.

Video, presented by James Heming which provides a comprehensive introduction to the Icom satellite PTT radio system, how it works, features of the radio system, available accessories and a short demonstration of the radio in operation.