The Importance of Two Way Radio Communication in Mountain Rescue 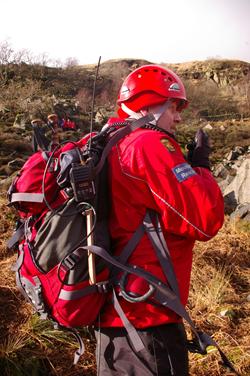 In any mountain rescue operation, communication is vital to the smooth running of that operation. Due to the rugged nature of the environment in the Derbyshire Peaks, most Search and Rescue (SAR) operations will be carried by teams on foot. Only in exceptional circumstances can vehicles get easy access to the casualty site. Consequently first responders need to be able to assess the situation and request correct equipment and personnel to attend the site. Even in the simplest incident (e.g. an injured walker, climber etc.), the team vehicles and equipment will rarely be able to park within sight of the casualty site. Those first on scene will need to ensure that the correct equipment and personnel are delivered to site in a timely fashion. It is, in search incidents that radio really comes into its own. In any search, small parties of between 3 and 6 people will be given a portion of the total search area to investigate. The search management team will be situated in the incident control vehicle and need to keep in contact with hill teams at all times. Derby Mountain Rescue Team (DMRT), predominantly use Icom IC-F51 VHF hand-portable transceivers for the hill going team members with vehicle mounted sets in the team vehicles. Team sets are equipped with large external antenna, including a 30ft mast in the case of the team’s incident control vehicle. Many of the handsets are also provided with a large antenna to enhance coverage. Ofcom have assigned specific VHF frequencies to be used by search and rescue teams across the county and teams in adjacent areas will be assigned different channels to ensure that there is no interference between team channels and that each team can operate close to another without fear of cross-communications. Of course, all handsets can be switched to any of the assigned channels, so joint operations can still take place on a single channel. In most cases, radios are used on a single open channel, so all sets can hear the communications from all others. Radio users are assigned a call-sign and a strict voice protocol is utilised to ensure that one to one or one to many conversations can take place with problems. In some circumstances a second local channel can be used. In these cases, the users will arrange to use a specific private channel for the duration of that task, providing local communications. Team organisation is such that in known areas with lots of hills and valleys, team members can be utilised as “links” and will site themselves at key locations, passing messages between parties who otherwise are unable to talk directly. Around the country, many mountain rescue teams are using radio handsets with GPS receivers built into the microphones. These GPS devices pass location information back to the team’s base (or base vehicle) using FFSK signalling over the voice channel. This allows search managers to quickly see where all of their assets are located, making it easier to manage operations. To find out more about the important work that Derby Moutain Rescue Team provide, please visit their website at http://www.derbymrt.org.uk/. The typical operating costs of the Derby Mountain Rescue Team are £20,000-£25,000 per year, which covers the running costs of two vehicles, repairs and replacements to radios, medical and specialised equipment, insurance and the upkeep of the garage. The Team receives no official funding and relies on donations from the public and other sources for all its needs. To make a donation, please visit the PayPal link on their home page. About Derby Mountain Rescue
Derby Mountain Rescue Team was formed in 1964 following tragic events on the 4 Inns Walk when three Rover Scouts died competing in that year’s event. Prior to 1964, walkers who became lost and climbers who fell had to rely on good fortune to be found and helped. This was the case in both the High Peak and the Derbyshire Dales because few Rescue Teams existed. The few teams that did exist were often comprised of Rover Scouts who, with local inhabitants and the Police, made their best efforts to carry out a rescue. At the time of DMRT’s formation all of the team members came from the 51st Derby (St. Luke's) Rover Scout Crew, were aged between 17 and 30 years old and were keen walkers and climbers. Shortly afterwards the Peak District Mountain Rescue Organisation (PDMRO) was formed to co-ordinate Mountain Rescue work in the Peak District. DMRT, along with others in the Peak District, became affiliated to it. The function of the DMRT at this time was to assist established Teams in any search or rescue operation. Later, as more people took to the hills, the accident potential increased and the need for trained rescue personnel became apparent. A comprehensive rescue service could only be provided if the Teams were properly trained and equipped. Consequently, the Derby Team made a major fund raising effort to finance the acquisition of some basic, but specialised, Mountain Rescue equipment. DMRT gained recognition as an official Mountain Rescue Team after an assessment by the PDMRO following intense training. Since then continuous training and a wealth of rescue experience have helped to make the DMRT a competent and well-respected part of the Mountain Rescue Service, not only in the Peak District but also in areas including the Lake District, North Wales, and Scotland. During the past few years, DMRT (either as individual members or as the Team) has been involved in many rescues inside and outside the Peak District. Regular training exercises and modern equipment means that the Team is available on call 24 hours a day, 365 days a year. The Team can be mobilised and on its way to the incident within a few minutes of receiving a call from the Police. The Team is a company limited by guarantee (No. 4229996) and a registered charity (Reg. No. 1089237).