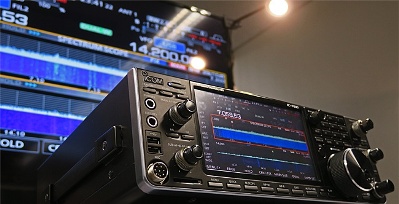 Over 400 people attended the Icom Amateur Radio Festival on December 10th 2016. The main star attraction was the unveiling of the latest, prototype version of the "IC-7610" HF / 50 MHz band all-mode transceiver which the lucky attendees were able to operate. The biggest announcement made is that the receiving section has changed from the conventional superheterodyne method to a "direct sampling method" like the IC-7300. Equipped with real time scope, "complete dual watch" will be possible like Icom’s top of the range transceiver, the IC-7851. The main band and sub bands will be completely independent and different frequencies and modes can be received simultaneously. Different antennas can be connected, and two speakers can be connected. You can also output it even if you divide left and right with headphones. Other features announced: • 7-inch wide, touch screen colour liquid crystal display
• Built-in speaker, same diameter as the IC–7300.
• External digital display terminal (DVI)
• SD card slot for easy firmware updates You can listen to the main and sub with one antenna, and you can also divide the used antenna between the main and sub. Also, "diversity reception" can be also used in which the same frequency is received by different antennas. AGC control is separately possible. BNC connectors have been adopted on the rear RX ANT IN / OUT and transverter terminals A short video showcasing this prototype can be found on the Hamlife.co.jp YouTube channel: IC-7610 Preview Video. Please note that these are still preliminary details. This was only a working prototype so some features may change. No announcement was made about potential pricing although Icom have suggested an early summer release in Japan. To keep up to date with all Icom News, stay tuned to this website and social media channels or sign up to our Newsletter. . Icom UK Marketing - marketing@icomuk.co.uk
21/12/2016