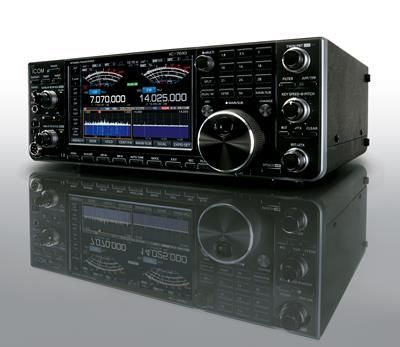 Icom has released a firmware update for the IC-7610 SDR HF/50MHz Transceiver. The firmware update provides the following improvements: Changes from Version 1.30
The spectrum scope has been improved. - Scroll mode allows you to seamlessly change the displayed scope range, depending on the operating frequency.
- A popup screen displays when SPAN or EDGE is selected or added.
- The number of FIX EDGE memories has been increased to 4.
- Reference level is independently memorised for each band.
- The Reference level of the Centre mode scope screen while transmitting is fixed at a set level independent of the user’s selection.
- The Scope function of the RS-BA1 has been improved. Other changes
- The transceiver’s settings are now retained after updating the firmware. (not when reverting to an older version)
- While operating in the Data mode, the Receive Tone Control is deactivated.
- The RS-BA1 Version 2 software will support the IC-7610's Scroll mode from its firmware Version 2.40 (coming soon!). This firmware can be downloaded from the following URL from the Icom Inc website: www.icomjapan.com/support/firmware_driver/3298/ More detailed information about the Firmware update can be downloaded here: IC-7610 Version 1.30 Firmware information. Please note to follow the instructions carefully when performing this update. Icom UK Sales - sales@icomuk.co.uk
27/04/2021