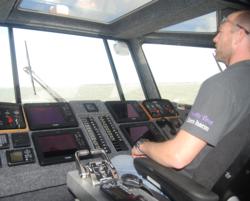 Cutting edge boat design, professional installation and intuitive electronics provide the background to the launch of the Channel Chieftain VI, a new 19m Crew Cat. The Channel Chieftain VI is the very first vessel in it class to feature a semi elevated helm with windows going around the whole cabin. As part of its build, Icom’s new commercial Marine Commander System was installed to provide a networked solution for navigational and communication equipment for the vessel. The Channel Chieftain VI is the latest vessel to be built by Aluminium Boatbuilding Company (ABC Marine) and is a first in class 19m Catfish CrewCat. To be used predominantly as a wind farm support vessel, the Channel Chieftain VI, is the first vessel in class that has a semi elevated helm yet still retains full forward visibility for the lower cabin. Powered by twin Doosan 20L diesels, producing 1000BHP driving conventional props, cruising speeds of 23-24kts are easily achieved. The vessel provides accommodation for 14 technicians as a multipurpose platform predominately for offshore crew transfer, with a permissible deck cargo of 22T. Capable of carrying standard 20ft shipping container on the foredeck and a 10ft container aft Channel Chieftain VI is one of the most versatile 19m Catamarans available anywhere in the UK and can be adapted for Surveying, dive use…whatever is required. The electronics for the vessel were supplied by Landau UK Ltd . Ben Metcalfe, Managing Director of Landau said, ‘Having been impressed by Icom Icom’s Marine Commander Navigation System at the Southampton Boatshow, we discussed the installation with ABC Marine. We were confident the unique features of the ICOM Marine Commander system would fit well with ABC Marine’s reputation for producing vessels that deliver reliable and proven performance combined with low maintenance costs and multi-task applications.’ ‘The Marine Commander system we specified was comprehensive and included: • Four Icom MXD- 5000 12.1 inch TFT Multifunction displays
• Two Icom Marine Commander’s Main MXP-5000 main processors
• One Icom MA-500TR AIS transponder
• Two Icom MXR5000T Main Radar Units
• One Icom MXF-5000 Fish Finder Unit
• One Icom IC-M801E MF/HF Marine SSB with HS-98 Telephone Handset
• One Icom IC-M603 Marine VHF Radio with HS-98 Telephone Handset
• One Icom IC-M423 Marine VHF/DSC Radio with HM-195B CommandMic
• Two Icom IC-M91D Handheld DSC VHF Radios
• One Procom HF Whip Antenna, two Procom VHF Antennas and one Procom AIS Antenna In addition to this, the system has the capacity to display real-time fuel consumption, engine speed, depth and temperature, and has provisions for four on-board cameras to be connected (via RCA connectors).’ So how was the installation planned? Ben Metcalfe of Landau said, ‘We were very flexible with ABC Marine’s build timing, working around their construction schedule, providing dimensions and specifications of all the equipment to be fitted so that the custom dashboard could be designed and constructed long before the equipment needed to be ordered or installed. As soon as the boat was ready for us we were on it within a few hours.’ Paul Johnson, Managing Director of ABC Marine added,’ the install for the Marine Commander took about two and a half days. It is actually one of the simplest systems on the market to install. The units are all full plug and play. The GPS, depth sounders, and radars plug in, the screens plug in to the main processor and that’s it. There is no rewiring; making new ends, plugs, systems or cables. Everything just connects into the main marine commander PSU and it all runs from there. The time saved installing the kit is phenomenal.’ What impressed you about the Marine Commander? Paul said, ‘For the commercial offshore wind farm market, if you are not careful, you can overcomplicate an install. The skipper is there for one purpose, to helm the boat, not to spend unnecessary time operating an overcomplicated range of electronics. The Icom Marine Commander lays out the basic units including radars, depth sounder/fish finder module, GPS modules, AIS modules. These are the main units but you also have camera inputs and that’s spread among four 12 inch screens on our install. That’s it…that’s all the skipper required…you don’t need a lot of individual touch screens or messing about…all you have is a simple system that is reliable and is there to do the job it’s there to do.’ He added, ‘Touch screen can be good in certain situations, but very often, you have to go through 3 or 4 different menus to get to the function you want. With a system like the Marine Commander you have a lot of traditional soft keys and it only takes a couple of button presses to be where you want to be. A 12 inch full colour screen, daylight viewable with soft keys works allowing you to operate your instruments quickly and easily...even when your hands are wet and dirty. That’s where the Marine Commander works so well.’ Asked about his impressions of the Icom Marine Commander, Ben Metcalfe said, ’The robust nature of the Marine Commander system, its ease of use and networking capability (allowing screens to be split as the operator chooses) suited the extreme demands of this very capable vessel in harsh sea conditions.’ Ian Lockyer, Icom UK’s Marketing Manager said, ‘The Marine Commander brings together, in one simple multifunctional display unit, all of your essential safety and navigational electronics. When you are looking for a commercial grade navigational system for your vessel with the Icom dependability, the Marine Commander is the solution you should be looking for.’