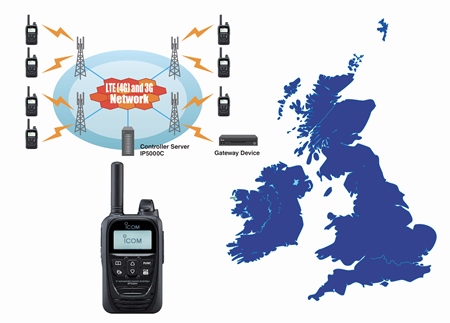 LTE/PoC Two Way Radio System Utilising the biggest UK 4G/3G LTE networks*, the Icom PoC (Push-to-Talk Over Cellular) radio system provides licence free nationwide communication and instantaneous high-quality full duplex operation. The PoC system uses the mobile phone network thus reducing the cost of building and maintaining a wide area radio network. * Network coverage provided by custom ICOM SIM card. System will fall back to a 3G network if 4G is unavailable. Nationwide Coverage Over 4G/LTE Closed Private Network
Icom’s PoC radio system allows you to communicate with your two-way radio system over a 4G / LTE closed private network. Now you can benefit from nationwide coverage for your business without the use of repeaters thus reducing the cost of building and maintaining a wide area radio network. The closed system will operate from a private LTE mobile data network providing an extra level of security. Full-Duplex Communication
The IP503H/IP501M enables the use of full-duplex communication which provides smooth telephone style conversation with PTT operation. The LTE/PoC Radio System uses 4G / LTE and multiple users can initiate calls respectively, without interfering with each other. There is no requirement to check or wait for channel availability. Group Call
The LTE/PoC Radio System supports group call with three or more people. In case of emergency, you can break into an on-going call to transmit an important message. Interconnect between IDAS and IP100H Systems
With the help of a VE-PG4 Gateway Device, the IP503H/IP501M PoC system will provide interoperability with an IP phone, analogue transceiver, IDAS digital transceiver and IP100H wireless LAN network systems. RMS-IP
Our RMS-IP LTE Dispatcher will allow you to not only manage & monitor your fleet of radios, but also keep in touch with your team from a PC, laptop, tablet or smartphone. It will also log and store a recording of all radio traffic as well as GPS history and provide a variety of security features, such as geo-fencing, emergency alarm and emergency SMS and email. RMS-IP also benefits from no licensing keys, so you can access the portal on any PC. Other Features
• High quality, clear audio.
• Built-in Bluetooth and GPS.
• Individual, Group and All Calls.
• The IP503H/IP501M PoC radios are equipped with an emergency button and emergency related features including Man Down function and lone worker function.
• Vibration alert function notifies of incoming calls. (IP503H only)
• Text message reception and pre-programmed message transmission.
• Up to 500 memory address book (including Group, Individual, Talk group and Telephone lists.)
• Voice message recording.

Icom’s LTE/PoC Two Way Radio System is proving to be very popular with many organisations and businesses in the UK including event management, security, logistics & courier companies and sports events/associations. We have put together a video to demonstrate why the system has become popular and: • How it works
• The features of the system
• The product range including the IP501H LTE handset, IP501M LTE mobile, VE-SP1 Desktop Conference Speaker, VE-PG4 RoIP Gateway Module
• Range of accessories
• Despatcher manager which will allow you to track your fleet of LTE/PoC radios.