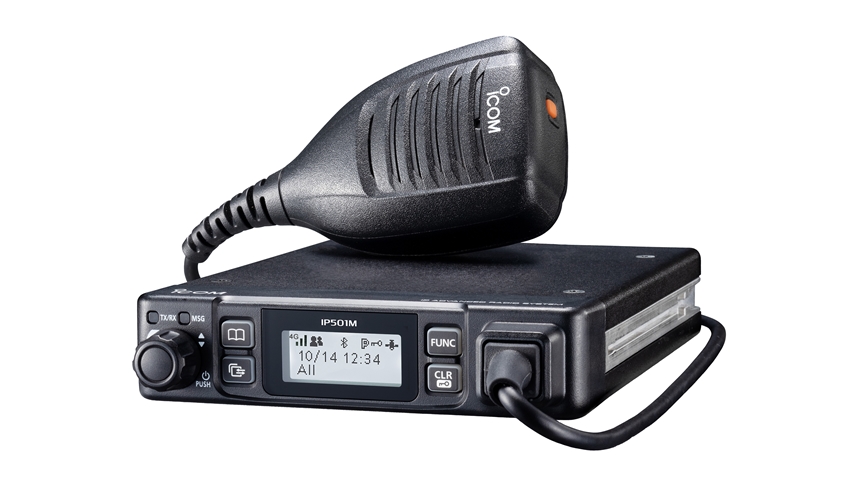 IP501M LTE/PoC Mobile Radio The IP501M is a new LTE/PoC mobile radio to complement Icom's IP501H/IP503H LTE radio handheld counterpart. Designed to be installed in a vehicle, the IP501M will provide a straight forward, easy to use communication tool allowing drivers* with nationwide and European** PTT radio coverage using the LTE/4G and 3G network.

* Guidance about the use of radio equipment in vehicles can be found on our website: The Use of Two Way Radio Equipment in a Vehicle
** Network roaming charges may apply, check with Icom UK first.

Nationwide Coverage Over 3G & 4G / LTE Closed Private Network
With the custom Icom SIM card, the IP501M operates over 4G / LTE in a closed private network. Businesses can benefit from nationwide, European or even global coverage* without the need for repeaters thus reducing the cost of building and maintaining a wide area network. Users also operate on a closed, private LTE mobile data network providing an extra level of security.

Simultaneous TalkListen Function for Full-Duplex Communication
The Simultaneous TalkListen function provides full-duplex one-to-many communication which users can talk and receive at the same time like a telephone style conversation. Interconnect between IDAS and IP100H Systems
With the VE-PG4 RoIP Gateway Module, the Icom LTE radio solution will provide interoperability with a whole host of radio systems and operating aids such as IP phones, analogue transceivers, IDAS digital transceivers and IP100H wireless LAN network systems. In addition, GPS positional data can be displayed on a dispatcher. Optional HM-230HB Remote Speaker Microphone with External Display & User Keypad
The optional HM-230HB Remmote Speaker Microphone offers an external user interface featuring a full keypad. The screen of the IP501M is replicated onto the HM-230HB giving the user a handheld-like interface. Custom Roaming Tri-Band Icom SIM Card
The custom tri-band Icom SIM card allows the IP501M to roam between the 3 leading UK network providers as well as providing roaming throughout Europe at no extra charge. Licence Free Solution
No licencing is required to use the IP501M, as the 4G/LTE radio solution does not use the conventional radio spectrum, making it suitable for those companies that have vehicles that cover a larger distance. Flexible Monthly Budgeting Available
Attractive and affordable options are available to suit an organisations requirement. Same Operation as IP501H/IP503H
Just like the IP501H/IP503H, the IP501M utilises the same intuitive menu layout. This allows organisations to have a mixture of handhelds (IP501H/IP503H for individual use) and mobiles (IP501M for vehicle use) recognisable to all with the same operating system and key layout. The IP501M also offer full-duplex communication, users can talk and receive at the same time during ‘Individual’ and ‘Group Calls’.

Icom’s LTE/PoC Two Way Radio System is proving to be very popular with many organisations and businesses in the UK including event management, security, logistics & courier companies and sports events/associations. We have put together a video to demonstrate why the system has become popular and: • How it works
• The features of the system
• The product range including the IP501H LTE handset, IP501M LTE mobile, VE-SP1 Desktop Conference Speaker, VE-PG4 RoIP Gateway Module
• Range of accessories
• Despatcher manager which will allow you to track your fleet of LTE/PoC radios.